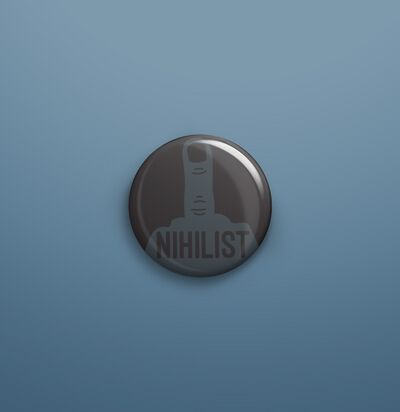 Moderns who know that nothing means anything.

She should have died hereafter;

And all our yesterdays have lighted fools

The way to dusty death. Out, out, brief candle!

Life's but a walking shadow, a poor player

That struts and frets his hour upon the stage

And then is heard no more: it is a tale

Told by an idiot, full of sound and fury,

(Shakespeare, W. The Tragedy of Macbeth)

Scene in movie Play it again Sam. (Allan Felix, played by Woody Allen, tries to pick up a pretty girl at an art gallery.)

Felix: That's quite a lovely Jackson Pollock, isn't it?

Felix: What does it say to you?

Girl: It restates the negativeness of the universe. The hideous, lonely emptiness of existence. Nothingness.The predicament of man forced to live in a barren, godless eternity Iike a tiny flame flickering in an immense void with nothing but waste, horror and degradation forming a useless straightjacket in a black absurd cosmos.

Felix: What are you doing Saturday night?

Felix: What about Friday night?