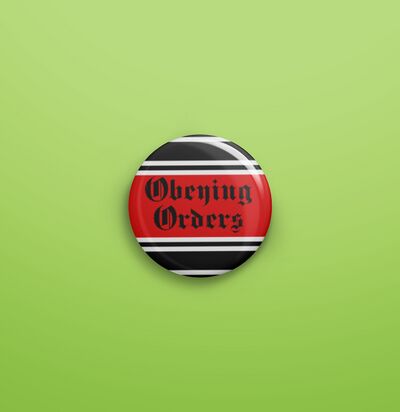 People who excuse their cruel or insensitive behaviour by claiming they are only doing what they were told.

Mercenaries, hitmen and the military.

Know that it's more than your job's worth[1] to think, talk or act in any other way.

Never forget that the Law is on your side and Order in this world depends on people like you.

If you are lucky enough to have a uniform, wear it with pride!

Theirs not to make reply,

Theirs not to reason why,

Theirs but to do and die:

Into the valley of Death

(from The Charge of the Light Brigade by Alfred Lord Tennyson)

Signs in Helvetica show you the way.

Obey with gratitude – that’s what I say.

(Brian Kaplan, from Instructions for Androids[[1]])

The practice of putting women on pedestals began to die out when it was discovered that they could give orders better from there.

Those who know the least obey the best.

Discipline, law and order are indeed important but so is personal conscience.